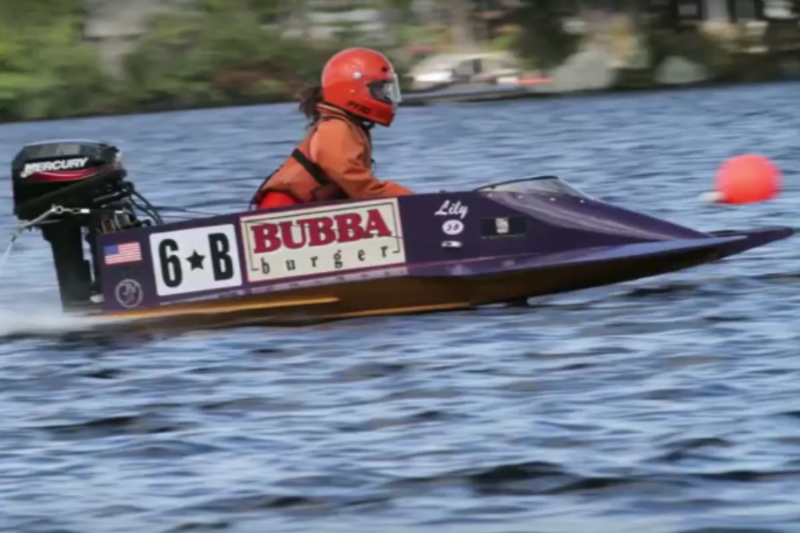 Eighty-five-degree temperatures, no wind and a smooth lake surface made for a big change from the previous BUBBA Series event at Standish Maine where the drivers fought chilly, windy and rough water. The conditions seemed to suit the fifteen-year-old Woddle the best as he drove to wins in both days of racing in the Junior Class. Coming off multiple wins at Standish ME, Team BUBBA driver, twelve-year-old Eden Deware of Easton, MA continued her second half surge with another impressive weekend with two second place finishes. New Hampshire drivers Eli Campbell and Jack Lyons split the remaining third place positions.

Woddle's strong weekend clinched his second BUBBA burger Series Junior Class Championship. Eden Deware, on the heels of a strong second half run that included two wins, moved up to second place. Eli Campbell held on to a third-place series finish with Jack Lyons in fourth.

In the AX Class, Eden Deware scored her first AX victory on Saturday with Dave Woodle finishing in second place and new rookie (and mother of driver Jack Lyons), Anya Lyons picking up her first podium in third place.

The final points in the AX Class failed to show the domination that Woodle had over the field all season. Although different drivers gave chase, Woodle lived up to billing as the Series top AX driver. In the end it was Woodle with Eli Campbell making a strong effort for second place and last year's SSOA Rookie of the Year winner, Jack Lyons finishing third and Eden Deware in fourth.

The next event on the calendar will be the South Shore Outboard Association banquet on November 11th when they will officially be awarded their trophies and titles.

The BUBBA burger New England Junior Hydroplane Championship Series (www.bubbaburgerseriesjrseries.com) is a New England race series hosted by the South Shore Outboard Association (www.southshoreoutboard.com) and sanctioned by the American Power Boat Association. Since its inception in 1953, the SSOA has produced over 1000 race events throughout New England. Additionally, SSOA drivers have won over 100 National, North American and World Championships.

BUBBA burger, made from the highest quality ingredients. BUBBA burger is America's #1 branded burgers found in the freezer section of your favorite grocery stores throughout the US. (bubbafoods.com).