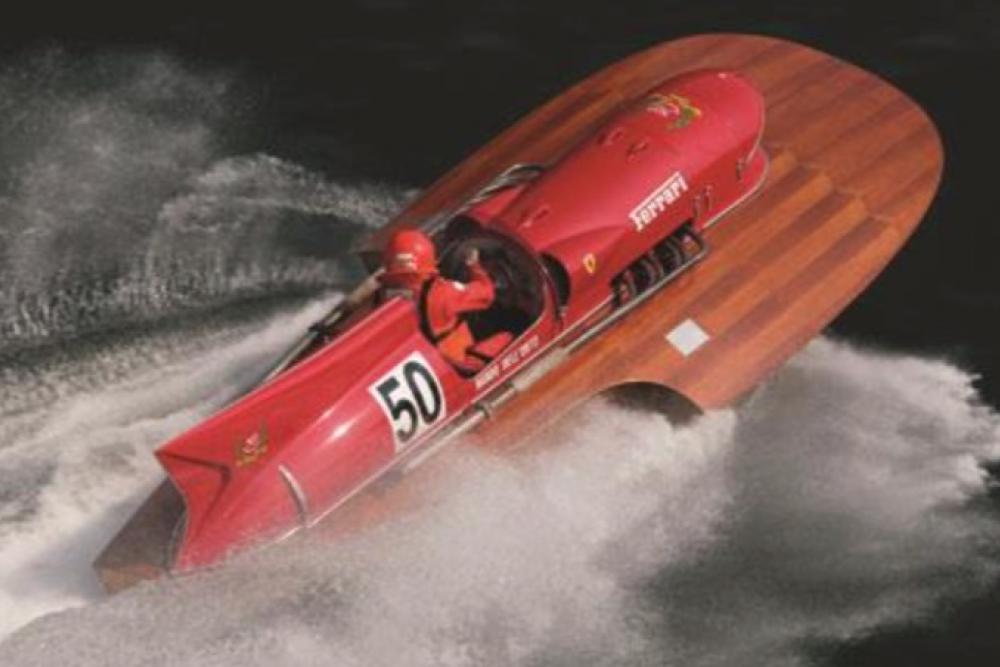 MARANELLO, ITALY - The only Ferrari-powered hydroplane in history is garnering worldwide attention at its original home in Maranello, Italy. Built in 1952, with the personal involvement of Enzo Ferrari himself, this historical one-of-a-kind hydroplane is being prepared for its upcoming 70th anniversary with an engine restoration at the famed Ferrari Classiche technical center.

The boat, named Arno XI, was built to break world speed records and has an unprecedented pedigree, setting an unbroken record of over 240 kph in 1953 on the Lago d'Iseo, Italy. In 1951, the boat's first owner, Achille Castoldi, befriended Ferrari Grand Prix drivers Alberto Ascari and Luigi Villoresi. The two famous racers helped Castoldi secure what would become the only Ferrari engine ever built specifically for a watercraft. Enzo Ferrari agreed to be personally involved in the project, overseeing every step of the motor build and testing. Ferrari's Head of Engine Design, Aurelio Lampredi and the engineering team were all directly involved in the project.

"This is one of the most important engines in the history of Ferrari," said Luigino "Gigi" Barp, head of Ferrari Classiche, the Ferrari pision responsible for restoring classic Ferraris to original condition. "We have restored the rarest and most valuable Ferraris ever made, but obviously we have only ever worked on car engines and bodies. Restoring this 1952 Ferrari engine, specifically hand built for this unique installation, is the thrill of lifetime for all of us at Ferrari headquarters."

"Imagine being a top technician at Ferrari and being able to work on the very same parts that Enzo Ferrari himself helped craft and design," said the boat's fourth and current owner, Austin businessman Milton Verret. "As a collector of unique and rare Ferraris, there is nothing that compares to a racing boat powered by an F1 race-prepared Ferrari engine. Add to that Enzo's personal involvement, and you have a working engine that most motorsport enthusiasts would die for. It's just that unique."

The 1952 motor that still sits atop the Arno XI today is a 4.5-liter Type 375 12-cylinder Ferrari engine (1952 is stamped on the engine block.) This is the same type engine that powered Ferrari to its first ever Formula One World Championship win at the British Grand Prix held at Silverstone the previous year. The engine features 12:1 compression with enough power to drive the twin blade propeller to 10,000 rpms. The motor is fitted with a dual-magneto ignition system with 24 spark plugs instead of the usual 12. Using magnetos instead of distributor caps ensures the motor will keep running, even if covered in water. The Ferrari engine originally produced 350 bhp. But after some initial test runs and races in early 1953, even though the boat did speeds well over 100mph, Enzo Ferrari ordered the engine modified for methanol fuel to allow higher compression ratios. He added two Roots compressors (or twin superchargers) and a pair of massive four-choke carburetors, with the result that the engine ultimately delivered more than 500 bhp!

The boat has a pedigree filled with world speed records all due to this Ferrari engine.

"When my team at Ferrari finishes their work on the engine, it will run the same way it did when Castoldi and our founder, Mr. Ferrari, first turned the key in 1952," added Barp.

"I wanted to make sure that the boat was in perfect condition in time for its 70th anniversary," said Verret. "Preserving the history of Ferrari is what it's all about. This kind of rarity makes some Ferraris worth tens of millions of dollars. Having the "one of one" boat is priceless."

Since 2012, the Arno XI has been on loan from Verret to both world-famous Ferrari museums in Italy. The vessel has been seen by hundreds of thousands of visitors. The boat was on display side by side with the 1951 Ferrari F1 winner, showing the Ferrari dominance on both land and water. According to Barp, "This is an on-going chapter in history for Ferrari. Our engines are really made to run forever and after close to 70 years, it's an honor to have this one-of-a-kind design, custom built by hand, now in the Ferrari Classiche shop. Mr. Verret has entrusted it to us, and we are doing the same for Ferrari enthusiasts worldwide." Ferrari Classiche expects to have the work on the Ferrari boat completed by early fall, at which time Mr. Verret has plans for a world tour showing it to Ferrari fans everywhere.